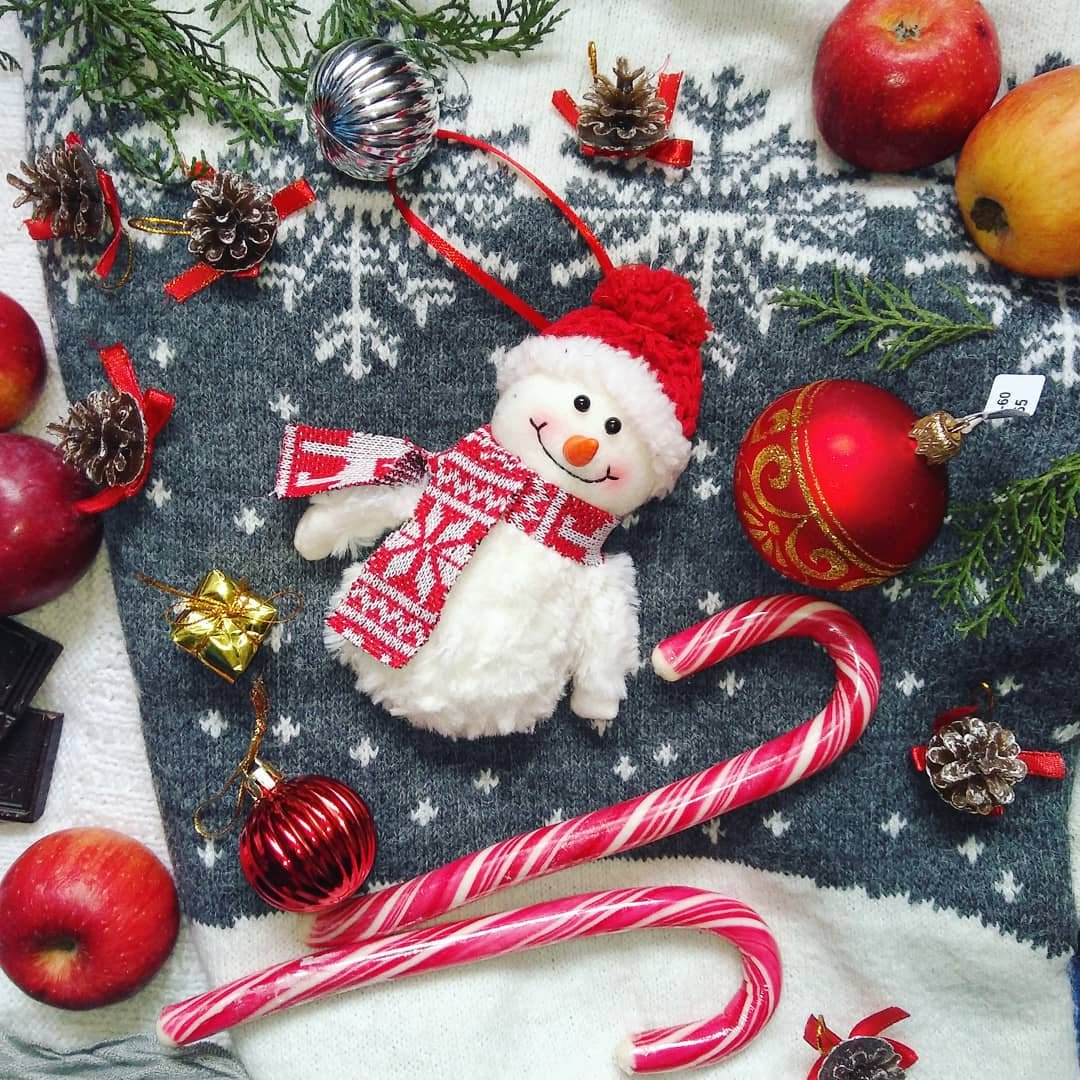 Christmas is so exceedingly busy that most of us probably get few precious minutes to think of the origins and messages of the holiday. You don’t have to be religious to appreciate the meaning of Christmas and enjoy the happiness it brings. Let’s have some fun and a little education with some facts and tidbits about Christmas.

As depicted on many a Christmas card or storybook, Santa’s reindeer are likely female. Male reindeer lose their horns some time before Christmas. The poem which introduced them by name, “A Visit from Saint Nicholas,” (also called “’Twas the Night Before Christmas), never hints at their sex.

2 We Three Kings of Orient Are

Common nativity scenes often show three Wise Men or Kings. The bible never actually gives a number. The number three is assumed because three gifts were mentioned. According to the gospel of Matthew, they were not there at the day of Jesus’ birth but perhaps as much as 2 years after the event.

3 Santa Claus is Coming to Town

In order for Santa to deliver all the world’s presents on Christmas Eve, he would have to visit 822 homes per second, all this while traveling at 650 miles a second.

Although many decry the word “Xmas” as anti-religious, it isn’t actually an affront at all. The letter X is a Greek abbreviation for the word Christ.

The world’s tallest cut Christmas tree to date, according to the Guinness Book of World Records, was a 221 feet tall Douglas Fir erected at the Northgate Shopping Mall in Seattle, Washington.

6 Rocking around the Christmas Tree

The world’s oldest Christmas tree was purchased in 1886 and gets faithfully removed from its box and decorated every year by Janet Parker, the original owner’s great niece. For nearly 130 years the little tree has brought cheer to the family.

Christmas carols sung door to door began with the English tradition of wassailing. Wassailers would go door to door, singing and wishing a long life to their neighbors. Although not originally religious, carols later were sung in churches and became associated specifically with Christmas.

9 Put a Little Boogie in My Stocking

The tradition of hanging stockings originated in Germany/Scandinavia. Children would leave boots near the chimney filled with straw, carrots or sugar for Sleipnir, the flying horse belonging to the Norse God Odin. Odin would reward the children’s kindness by replacing the food with gifts or candy.

Mincemeat was originally made from chopped meat, along with dried fruits, flavorings, and sometimes wine or brandy. Modern recipes and off-the-shelf jars or mixes contain no meat, although there are several recipes on the internet that still feature meat as a key ingredient.

11 Angels We Have Heard on High

Although many Christmas songs mention the songs of angels, such as “Hark the Herald Angels Sing” and “It Came Upon a Midnight Clear,” there is no mention of angels singing in the Bible.

In 2008, the residents of Bethel, Maine and surrounding areas built the world’s largest snowman, standing at 122 feet tall.

The first Christmas tree farm in the United States is believed to be one planted by WW McGalliard in New Jersey in 1901. He sold his Norway spruce trees seven years later for just $1 a piece.

14 In the Bleak Midwinter

Many theologians believe that Jesus was actually born sometime in September between the years 6BCE and 30AD. The December 25th date came about by the proclamation of Pope Julius I, Bishop of Rome, in 350AD.

16 It’s Christmas All over the World

17 Dashing through the Snow

The song “Jingle Bells” was originally a Thanksgiving song. James Pierpont wrote it in 1857 and called it “One Horse Open Sleigh.”

There were certain times in history when Christmas or the celebration of it was outlawed. Puritan leader Oliver Cromwell outlawed celebrations and carols in Britain from about 1649 to 1660; and in the US, Puritans viewed Christmas celebrations as a decadent Catholic tradition and banned them from about 1659 through 1681. Puritans were only allowed to listen to sermons and to pray.

Native to Mexico, the poinsettia was grown as a medicinal herb by the Aztecs. The plant was named for Joel Poinsett, the first US Minister to Mexico, who brought it to the US. The popular Christmas plant, despite contrary belief, is not poisonous.

White Christmas, a Christmas song written by Irving Berlin and most notably performed by Bing Crosby, is estimated to be the best selling single of all time, with over 100 million sales worldwide.

Our favorite Christmas character was born in a story written by Robert May in 1939 for the Montgomery Ward department store. The retailer had been buying and giving away coloring books every year and decided creating their own book might save them some money. After distributing 2.5 million copies, Rudolph became a permanent part of our Christmas traditions.

22 It Must Have Been the Mistletoe

This Christmas plant has been associated with fertility and love since ancient times. The Druids considered it sacred, and the Norse goddess of love, Frigga, was associated with the plant. Kissing under the mistletoe started in ancient Greece and was used during the Saturnalia celebration and at weddings because of its association with fertility.

The first commercial Christmas cards were commissioned by Sir Henry Cole in London in 1843. The artist, John Callcott Horsley, featured a family drinking wine. Of the original 500, only about 9 have survived and have been valued at nearly $13,000.

The real Saint Nicholas was a bishop in what is present-day Turkey during the 4th century BCE. The most popular non-Biblical saint, he is 2nd only to Mary in the number of times he is depicted or portrayed in art.

25 I Believe in Father Christmas

26 Chestnuts Roasting on an Open Fire

Long ago, Euell Gibbons asked his audience if they’d ever eaten a pine tree, inspiring a number of satirical comments. It turns out many trees used at Christmas are edible. The needles make a nice tea. Both firs and spruces have a slight citrus taste and are a good source of vitamin C.

28 Walking in a Winter Wonderland

The first known Christmas tree lights were invented by and displayed by Edward Johnson, president of the Edison Electric Light Company, in 1882. The 80 hand-wired bulbs were the size of walnuts, and after a Detroit newspaper reporter published a story about them they started being used to decorate businesses. They were too expensive for the common household, and didn’t come into wide use until the 1930’s.

30 It’s Gonna Be a Cold, Cold Christmas without You

It is believed that the tradition of decorating a Christmas tree originated in Riga, Lativa. The first documented use of a tree used in a winter Christmas celebration was the one installed in the Riga Town Square Hall in 1510. It was decorated with paper and dry flowers, straw dolls, ribbons, and possibly fruit. After the ceremony the tree was burned.

34 All I Want for Christmas is You

It is no surprise that Christmas is an economically important holiday. In the United States, it accounts for a sixth of all retail sales.

At least one precursor to the modern day Santa Claus was the Viking god Odin. Odin rode a flying horse with eight legs (similar to the eight flying reindeer). Children filled their boots with gifts for the horse and left them near the stove (similar to stockings hung on a fireplace). Odin would then replace the offerings with goodies for the good little children (much like Santa fills the stockings after checking his list).

The volunteer emergency services group Pubblica Assistenza Carrara e Sezioni created the world’s largest Christmas stocking in 2011 in Carrara, Italy. It measured 168 feet in length, and was organized as a money-raising event for helping the aged.

The use of evergreens in celebrations originated with pagan worship. They are usually associated with eternal life and rebirth. Because of their pagan roots, Puritans and other early Christians shunned evergreen decorations. Many practices evolved and became Christianized, however, and from these early practices we have the modern Christmas tree, boughs of greenery, and wreaths.

Approximately 30 to 35 million live Christmas trees are sold in the United States each year.

One man’s Christmas tree has been standing in his living room for over 40 years now. Originally erected in 1974 when his son’s went to serve in the Vietnam war, he vowed to take the natural spruce down only when all his sons were home for Christmas. The eldest son, alive but injured in the war, hasn’t been able to make it home, and so the tree remains.

A man in Ireland found a letter written to Santa that somehow survived inside the fireplace since 1911. Written by siblings Hannah and Fred, it requested presents such as a baby doll, a waterproof coat with a hood, a pair of gloves, a gold penny and a long toffee.

Many credit the story “A Christmas Carol,” by Charles Dickens, with the elevation of Christmas to the major holiday it is today. During the time that it was written, in about 1843, Christmas was largely ignored by the majority of people.

Some of the earliest known Christmas tree decorations were apples. Medieval actors would put on Paradise Plays, depicting Adam and Eve’s rise and fall in the Garden of Eden. One prop was often a fir tree on which several apples were hung.

45 Who Spiked the Eggnog?

Eggnog is an important part of some people’s Christmas celebrations. Made from milk, eggs, cream, sugar, spices, and some kind of alcoholic spirit, its creamy goodness is much desired. It even inspired an Eggnog Riot in 1826 when whiskey was smuggled into the US Military Academy for a Christmas Day party which resulted in the court-marshalling of 20 cadets and 1 enlisted soldier.

46 While Shepherds Watched Their Flocks by Night

Candy canes date back as far as the year 1670. Folklore has it that a German choirmaster used the candy sticks to quiet children during yearly nativity plays. The choirmaster ordered candy sticks with a crook at the top to remind children of the shepherds that visited the baby Jesus. As the custom spread throughout Europe, the candy canes came to be associated with Christmas.

Although crafting gingerbread cookies into various shapes was popular beforehand, the tradition of the gingerbread house only became popular with the publication of Grimm’s “Hansel and Gretel” in 1812. Although the story is ancient, Grimm’s version has 2 abandoned children finding an edible house in the woods, which they hungrily begin to eat.

48 We Wish You a Merry Christmas

Christmas has only recently been celebrated as a family holiday. Originally, it was an celebrated as an adult holiday, where people would engage in a sort of “trick or treat” to get booze (the treat) or they would threaten harm to person or property (the trick). The carol “We Wish You a Merry Christmas” was a threat song, asking for a “cup of good cheer,” sung with the threat that “we won’t go until we get some.”

During World War 1, on the Christmas of 1914, a truce was held between the German and UK soldiers. They exchanged gifts and food, played football, sang carols and decorated their shelters. There were also joint burial ceremonies and prisoner exchanges.

Letters to Santa, unless they have a specific address, usually stay in the area where they were received. The program, called Operation Santa, engages volunteers both within the postal service and through volunteer organizations to answer children’s letters.

Now, you may have noticed that all the headlines are Christmas carols and songs. If there are any you don’t recognize, just let me know in the comments and I’ll tell you