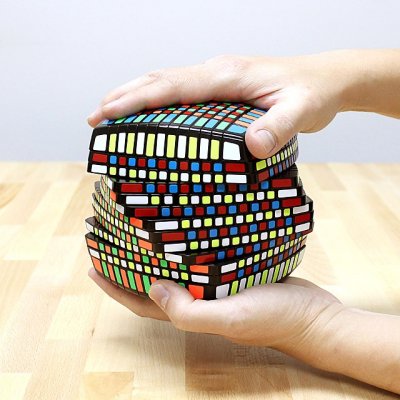 Have you gotten tired of playing the same games over and over? This isn't to say that games like Scattergories or Boggle aren't fun-not at all! I love them, and not only because I can wipe the floor at them. It's just that sometimes you want something that's different from anything else you've ever played or, in my case, shows a different side to an old favorite. Plus, it's always fun to discover something new. With that in mind, here are some of the best unique card and board games I've found. I know puzzles aren't technically games, but I'm including some anyway because there is so much more diversity in puzzles than there was when I was a kid. Plus, I have a keyboard and you don't. :) Some of them are pretty expensive, so you might want to put them on a “wish list”.

amazon.com
I've mentioned this in another article, but this is an even crazier version of a popular party game. Instead of one person acting out a clue for their team to guess, the whole team has to act out a clue for one person to guess! They have 60 seconds to get you to guess as many clues as you can, or the other team wins. You can imagine how crazy and confusing it can be when you have several people competing for your attention, especially if alcohol is involved!

amazon.com
This German-style strategy game is one of my husband's favorites. The idea is to build the biggest and most productive settlements while warding off robbers and other players. What's really interesting is that the game never gets old; the board is made of cardboard hexagons that are laid out differently each time, so there's always something new. It's a pretty complicated game, so I'll just let you read the description above. There's a kids' version too.

amazon.com
This is another German-style board game involving building settlements, only this time you're laying the tiles for your city as you go. I find it not to be *quite* as involved as Catan, which makes it a lot easier to deal with for people who like strategy games but don't want anything too complicated. Also like Catan, you can also find it and the expansion packs at most Barnes and Noble stores. If you're like me, you were probably going there anyway, so you might as well get one.

amazon.com
I know 3D puzzles aren't really new, but I'm including them because they are definitely good if you like a challenge. Unlike the traditional flat puzzles, the pieces stand up and fit together well because they're backed with foam instead of plain paper. The ones I've done are of the Capitol Building and the White House, but they have models of buildings all over the world and even some from the Lord of the Rings movies. If you don't want something too complicated, there are miniature versions. I've also seen “crystal” puzzles if you'd like a different look.

I have two of these-the one linked above and an “antique” style. The 540 pieces are numbered on the back so you don't have to guess where they go, but the challenge comes from making them fit while standing up. If a globe isn't your thing, they have plenty of similar puzzles on the page. The ones that light up are just plain cool. Definitely a unique game.

amazon.com
Granny Racers is a cute “gimmick game”. It's basically those battery-operated car race games we played with as kids, only using grandmas in wheelchairs. It's a great little game to keep in the break room at work; laughing at this and the other wind-up Grannies is a good way to blow off steam after dealing with annoying customers.

amazon.com
This card game is a parody of fantasy role-playing games like Dungeons and Dragons. I'm not familiar with D&D, but I'm pretty sure they don't have you fight a group of Undead Clowns using carbonated holy water or a staff filled with napalm. I could be wrong. Either way, it's a very silly party game that isn't very hard to learn. Some of the pictures and jokes on the cards are hysterical; you can probably enjoy the game just from that. The dozens (literally, dozens) of expansion packs are equally silly, so
there's no limit to the fun.

amazon.com
Now this is just hilarious. You're a zombie who rolls the dice to see how many “BraAAaAaaAaains” (yes, you have to say it like that!) she can chase down and eat before she gets shot with a shotgun. Eat 13 and you win. Simple. It's from the same person who created Munchkin, so the expansion packs just make it funnier. Personally, I want to try the Christmas one; Santa looks like he could be tasty.

amazon.com
Set in 1900 and spun off from the “Around The World In 80 Days” stories, this game has you build rail lines to distant cities to get as far across the continent as you can, as fast as you can. I've included the American version because it's the oldest and easiest to learn, but there is a European version with expansion packs for Asia and the rest of the world. I've never seen anything quite like it, so I'd definitely say it qualifies as a “unique game”.

I hope you've been able to find something interesting in my list for your next party or, in the case of puzzles, your next snow day. The whole community shuts down when it snows around here, so you'll definitely need something to do to keep from going crazy. Even if you're not snowed in, though, it's always fun to try something different. What are some of the more unusual or uncommon board and card games you've played? Do you have any suggestions for us? Discuss!