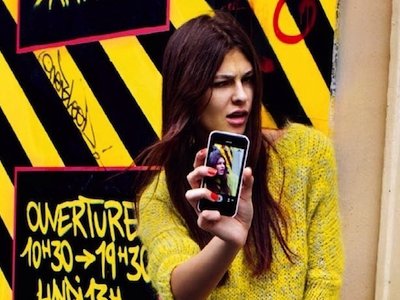 Selfies are a fun way to express yourself, but there are quite a few times not to take selfies. I love sharing pictures of myself when I visit certain places or after a cut new hairstyle. What I can't believe is some of the incredibly inappropriate selfies people are taking lately. While some of these times not to take selfies should be obvious, you've likely seen people breaking these selfie etiquette rules yourself.

I'm not sure what the appeal of taking a selfie on hallowed ground is, but it's actually disrespectful. I've seen far too many people smiling in their selfie with a gravestone in the background. To be honest, it's kind of creepy. Think about whether you would want strangers talking fun, happy pictures over your grave. This one probably tops the list of times not to take selfies.

Some people take any opportunity to take a selfie. I've actually seen some where people wanted to show they were crying at a relative's funeral. I honestly had to stare at it a second to realize what I was seeing. Even worse, you could see part of the coffin and flowers in the background. As with memorials and cemeteries, be respectful and save the selfies for later.

I can't tell you how many of my friends take selfies while driving. Some even do it with their kids in the backseat. I've even been seeing news stories where people have wrecked while taking a selfie. There are plenty of times to take a great selfie in your car when it's stopped. Doing it while you're driving is highly dangerous not just to you, but others on the road.

If you or someone else is injured, it's not the time to take a selfie. Believe it or not, numerous selfies are being taken at auto accident scenes, even if the person wasn't involved in it. Some are even taking selfies in front of destroyed homes from fires or other natural disasters. Tragic times are not appropriate selfie moments, especially if it isn't your tragedy.

I have absolutely no desire to do anything with a camera while I'm in the bathroom. This is private time for me to do my business. If you're like me, you're probably appalled to know many people are turning this sacred place into a selfie zone. This includes public bathrooms. The bad thing is innocent people are being included as a kind of joke in the background. Frankly, it's rude and disgusting.

Ever seen those selfies with someone else in the background where the entire point is to shame said person? Those are only funny if the background person knows they're being photographed. I've seen some with strangely dressed people, kids the selfie taker didn't know, homeless people and even half naked people in the background. It's not fair to the other person and in fact, it's a kind of bullying, especially if the selfie gets out. Make sure you're the only subject of the selfie.

It's fine to take a selfie at the gym just to prove you are sticking to your goal. What's not fine is taking selfies to make fun of larger people in the background. A selfie that shows a large person struggling with weights in the background while you smile happily in the forefront is just in bad taste. Not to mention, you're supposed to be exercising at the gym so you look great later, not posing for a camera. Wait to take a selfie after you leave the gym.

I've talked to friends who have taken drunk selfies and posted them to Facebook and other social networks. When they applied for a new job, they were rejected because of unprofessional behavior on social media. It's amazing the types of selfies that come to light after a drunken night out. You never know what you might be tempted to do and take a selfie of. If you don't want something embarrassing coming back to haunt you, avoid the camera when drunk.

Basically, if any private parts are showing or it's not an appropriate look to go to your favorite restaurant, it's probably not the right time for a selfie. Many people love taking topless or full monty selfies to show how free and sexy they are. What they don't realize is these selfies can end up floating around the Internet. What seems fun at the moment can very well embarrass you later. Always throw on some clothes before any selfie.

Selfies are perfect for showing off new styles, making others jealous while you're lying on a tropical beach in winter or letting everyone know about your engagement. Selfies are supposed to be fun and not hurt anyone. I save my selfies for fun times and only include people who want to be in the picture. Are there any selfies you regret or any times you think selfies are inappropriate?