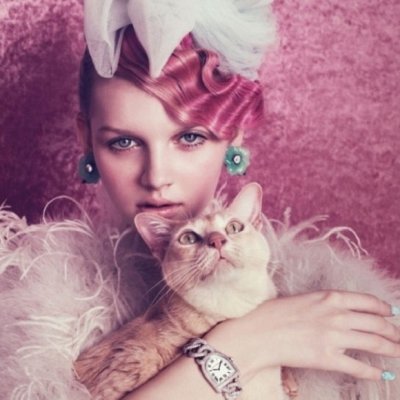 Everybody knows them - the crazy cat people, that is. Perhaps you have a lady in your neighborhood who owns several cats, or live near a family who have more than their fair share of felines? Whatever you think of them, I'm here to prove that crazy cat people aren't crazy! Sure, you might think they are, but just read on.....

1. Cats Are Good at Love

Ever had a boyfriend who just wasn't very affectionate? Crazy cat people never have that issue! They know that cats are good at showing love - cuddles, head bumps and tummy tickles are an everyday occurrence for most cats. When you're feeling sad, you cat will always be there for you, without asking anything in return. Now tell me, is that crazy?

2. A Cat Can Be Your Best Friend

When our cat Treasure died recently, I spent days feeling lost and empty. It's true that we get so close to our pets that their loss is like losing a member of the family. When I first moved to London and didn't know anyone, the cat quickly became my best friend, so when she died, it was heartbreaking. There's nothing crazy about that.

If you live alone, coming home to an empty house after a night out with friends or Christmas with your family can seem lonely. As all crazy cat people know, a house filled with cats never has this feeling! There are always little furry faces at the window watching out for your arrival or waiting on the mat to greet you. Aww, bless!

Some people say that cats aren't very intelligent; I beg to differ. Whilst dogs are playful and fun, there aren't many that will sit and look longingly at you whilst you tell them about your day (my dog, Dainty, being the exception of course!) Cats on the other hand are good listeners; they'll sit there (even if they don't understand what you're waffling on about) and listen to you whilst you rub behind their ears or under their chin.

5. Cats Are Less Work than Dogs

Dogs are great, don't get me wrong, but how many times have you moaned about having to go out in the cold, dark, wet weather to walk your dog? There's none of that with cats. Your kitty cat can remain inside come rain or come shine, and if they want to go outside, just install a cat flap and they'll take care of themselves! There isn't even any poop-scooping to do with cats - a litter tray is all you need!

6. Chances Are, Your Cats Won't Eat You

One of the rumors about crazy cat people is that when they die, they end up being eaten by their cats. Now, whilst this could, in theory, happen if you have (a) a large quantity of cats and (b) cats who go hungry for days after your death, it's really not that likely. Chances are your cats will be well-fed by neighbors or friends after your departure, and what are the odds that you'll end up kitty fodder? Slim to none, I reckon!

7. Two Cats Are Better than One

There's little in life that is cuter than two (or three, or four) kitties snuggling up together. Sometimes, you're tired from work and just not in the mood to play with your cats. They know this - that's why they curl up together or play fight on the sofa. They're perfectly capable of amusing themselves; they're independent souls!

Let's hope that after reading this you now have an altogether different view of crazy cat people - they're not that crazy, honestly! How about you; are you a cat or a dog person? Do you find yourself talking to your cats when you're alone? Or am I the only one crazy enough to even consider doing such a thing......?