Lesbians Are Pretty Tired of Hearing These 8 Comments ... 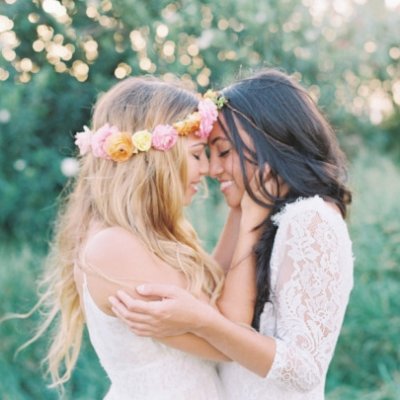 So, no big surprise, I'm a lesbian. I'm very happily married to a woman – we've been married for almost two years and together for nearly ten. Yet, like many other lesbians and bisexual women who are in relationships with women, I still hear so many comments that are sometimes rude, often thoughtless, and frequently offensive. I can't speak for all women, but I personally don't mind answering thoughtful, respectful questions asked by people who are genuinely curious … but there's a time and a place. The thing is, these questions and comments come from strangers, friends, and family. Some people mean well, some don't, but no matter what the case, most of the lesbians I know are pretty sick of hearing this ish.

Crazy as it sounds, neither of us! Neither of us identify as “the guy” because 1., that's kind of outdated, really, and b., we're together because we sort of don't really like penises. Weird, right? Seriously, this question comes up all the time. The day we came back from our honeymoon in Paris, our TWA official asked us this. She was just so flabbergasted when we revealed ourselves as “wives.”

3 “You've Just Never Been with the Right Man.”

Yeah. No. Never say this. This is so horrible. It makes so many awful, stupid assumptions. See, no, I haven't ever been with the right man because I don't like them. I dated men before I came out. I slept with them. Didn't do it for me. Even if this were remotely true, I would never want to spend my whole life faking orgasms in a fruitless search for “the right man.” I found the right woman, see. She's my heart.

What does a lesbian look like, pray tell? My answer to this is always simple: “Clearly I do look like a lesbian because I am a lesbian. This is what a lesbian looks like.” See, there's no archetype. There are stereotypes, but stereotypes are stupid. Lesbians don't “look” like anything. We look like your friend, your colleague, your sister, your mother, and the girl you dated in high school.

Yep. Been asked that. It's … it's just insulting and offensive on any number of levels. The worst is when someone asks you when your partner's right there and you're very clearly together. At best, it's like we need a man to get off, and like we'd be interested in the first place. At worst, I just can't stand that refusal to recognize a relationship between two women as valid. In my experiences, it also burns my biscuits that the guys asking so easily assume that we don't even take our vows seriously, that our marriage is nothing without a little dick in it.

But surely people mean well when they say that, right? No. In their hearts, some of them may feel that they do, but no. It's such a problematic statement for so many reasons. If your religious beliefs cause you to pray for homosexual people, I am not going to tell you that you are wrong, that you can't pray, or that you aren't free to practice your own beliefs. I am going to ask you to pray silently because I promise you, lesbians don't feel like we need to be prayed for or fixed.

The same way opposite-sex couples do, really. Heather and I will teach our children to be good, kind people who respect others and offer help whenever and wherever it's needed. We will nurture their gifts, shower them with love, and teach them to be open-minded and empathetic. How will you raise your family?

Curiosity is one thing. Being rude and invasive is something else entirely. As I write this, it's four days after the massacre in Orlando. Silence = death.