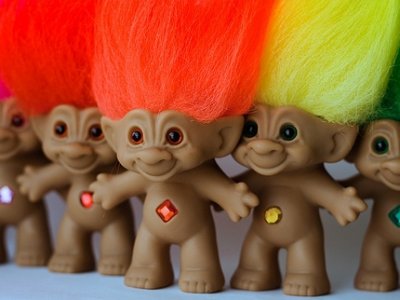 90’s Iconic Items aren’t hard to find, heck, you probably pass by them everyday now and think they are old! Well guys, I gotta tell you, I’m a 90’s baby (okay, so I was born in 1984, but I really started living in the 90’s!) and I think that the 90’s were filled with all kinds of great things! Were you a 90’s kid? Do you remember all of the 90’s iconic items out there? Don’t worry, I got your back, below, I’ve got the top 7 90’s iconic items that will take you back in time!

Now, don’t shoot me for this one, I know that they came out in 1970, but troll dolls are uber popular in the 90’s. I know that I had at least 14 different little dolls, all with a different jeweled bellybutton and different hair. I even had the clothes for them all! The troll doll is truly one of the 90’s iconic items that I wish would come back!

So now that the show is over, I’m just now getting into it! This awesome 90’s law-show was full of Ally getting into quirky situations and one of the most popular visions that she had was the dancing baby. I swear, this baby was everywhere in the 90’s; commercials, other TV shows – I swear, I even saw it in one of my dreams.

Just like the trolls, these little babies exploded onto the market in 1993 and just kept going! Ty Beanie Babies were one of the 90’s iconic items that is still around today! These Beanie Babies were expected to be like Barbies – where they collect value with time. Truth be told? It was all a hoax! Now people are stuck with hundreds of Beanie Babies without knowing what to do with them!

If you were a 90's kid then you know all about these two game consoles. Now, I actually owned both of them, but a lot of people had a thing against the Genesis if they owned a Super NES. For real though, the Super NES was my favorite system (and I still own one – imagine that)! Do you still have one of these 90's iconic items?

Do y'all remember pogs? The little flat discs that you could trade? I had a who bunch of these and these little pieces of cardboard (or metal) were truly one of the greatest 90’s iconic items!

If you grew up in the 90's, you know all about the Taco Bell Chihuahua. Gidget was the name and I gotta say, this little advertising figure was so popular all throughout the 90's! “Yo quiero Taco Bell! “ was heard constantly throughout the 90's and this little chihuahua started it all! I don't know, can a catch-phrase be a 90's iconic item?

Now I know that all the little Pokémon-lovers nowadays want to say that these little fictional characters started in the '00's, but truthfully? These little creatures came out in 1996 and they were on fire! I had the dolls, the card game and even the posters! I swear, the Pokémon card games that I used to get into were brutal! People were serious about their Pikachu! Because these little things were so popular and they made a stamp on the world, that's what makes Pokémon one of the truest 90's iconic items.

There are so many great 90's iconic items to choose from, this list was hard to come up with! So, what do you think? What are some of the other 90's iconic items that are out there that you can think of? Come on, take me back in time!