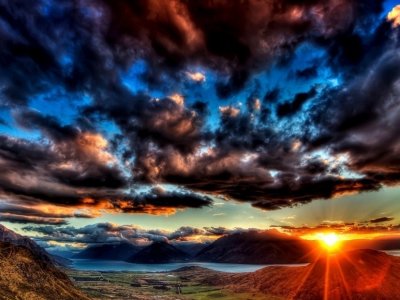 Mid-level clouds are formed between 6,500 feet and 20,000 feet, and, as a result, they are made of water droplets, ice crystals, or a combination of the two. Like high-level clouds, there are two main types of mid-level clouds. Altostratus clouds are flat and uniform. They don’t produce very much precipitation, but they can indicate a possible rain or snow shower. The other mid-level clouds are the alto cumulus clouds, which are heap-like clouds that align themselves in rows.

Wall clouds are a specific type of cloud that is formed when there is an updraft, which increases cloud formation at the base of a cloud and creates a wall appearance. These clouds can indicate a rain-free thunderstorm. They can also indicate a tornado, especially when there is a lot of air movement. Obviously, wall clouds are clouds you should pay attention to.

Shelf clouds are low, horizontal clouds that look like a shelf. They can have an imposing appearance, which is appropriate considering they can indicate storms. These types of clouds are associated with thunderstorms. Often, if shelf clouds are present during a storm, there will be very strong winds.

Mammatus clouds are a type of cumulonimbus cloud. They have a droopy, pouch-like appearance that makes them look like a mass of cotton balls. Mammatus clouds don’t often produce severe weather, but they are often seen near a thunderstorm. Therefore, while they don’t produce storms, they are a good indicator of storms.

Hole-punch clouds are perhaps one of the more unique types of clouds. They are formed when the water temperature in a cloud is below freezing, but the water is not yet frozen. When sections of the water start to freeze, a rounded hole can form in the cloud. These clouds can literally look like they had a hole punched out of them.

Gazing at the clouds is so peaceful and relaxing. Certainly, it is not important to know the names of the clouds when you are cloud gazing. However, it is fun to be able to name them. Did you know there were so many different types of clouds?