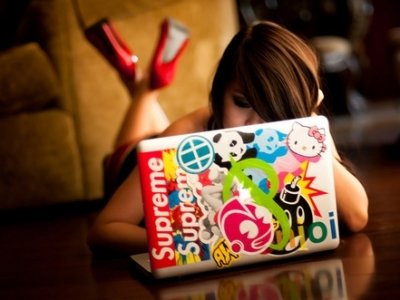 Your Tumblr is your own. You can do anything you want with it! The best tip for a successful Tumblr blog is to keep your blog authentic. Reblog what you’re interested in, even if it means your dash is full of kittens and baby elephants. You are who you are, and Tumblr isn’t the place to apologize for it. You’ll be far more successful on the site if you’re yourself, not caught up in the number of followers you have.

The background for your blog needs to be visually pleasing. Whenever I’m on Tumblr, I click onto blogs and within a second, I either keep scrolling or leave the page. Make sure the colors and background photos complement each other. You may consider a floral background like I have. Don’t put a picture of your friends or a photograph as the background; it looks tacky. Instead, use an image that blends so that you can’t tell when it starts and stops.

Most people stick to their dash but after a while, it gets dead. When that happens, I start searching for more blogs to follow. One thing I keep in mind while scrolling on someone’s blog is if they have an endless scroll. Tumblr is all about procrastination and finding new cute things or having conversation topics with friends. People who have endless scroll on their blogs realize this and are worth following. It takes too much effort to hit ‘next page,‘ and then forgetting what page you wanted to go back to reblog a photo.

It’s important to have an active blog. If people believe it to be a casual Tumblr that you don’t really care about it, then they won’t either. So it’s time to become best friends with the queue. You don’t have to be on your Tumblr to reblog. If you have them post in a consistent rhythm, then no one will notice if you take a couple hours' break to go to sleep. After all, we all need our beauty rest.

You’re going to want anon comments but that doesn’t mean you’re always going to get them. The most important thing to keep in mind is that it’s your blog. Not everyone is going to like it so don’t let any negative comments get to you. Also, don’t expect endless questions when you log on without putting that offer out there along with writing to other people so they know you like posting to people. It’s a balancing act though, so don’t flood your blog with only anon questions and answers. It gets repetitive and loses the interest of your followers, who really wanted to see those baby elephants you said you loved.

6. ”Reblog to Get Followers”

You know those posts I’m talking about. The ones that promise the world in followers if you only reblog their post. Don’t. No one really likes seeing them and would prefer to see your blog for the videos and pictures and chats it has now. Posting that makes it seem like you only are excited about the number of followers, not the followers themselves.

Showing your love for your followers is rather simple but impactful. Everyone wants to know that they are appreciated. Post text posts thanking them and saying how grateful you are for them. Go through your stats to see who’s been reblogging you the most and write them a message saying how happy you are that they like your blog. Small things like those can build you a good rep on Tumblr and make people want to follow you because they know they are valued.

I hope with these tips for a successful Tumblr blog, you’re ready to put yourself out there. Be yourself and have fun doing it. You can meet some incredible people on Tumblr; well, in addition to seeing the fandoms for Doctor Who and Supernatural. What do you think makes your Tumblr stand out more?