The Most Momentous Memorable and Magical Moments from the Day Love Won ... 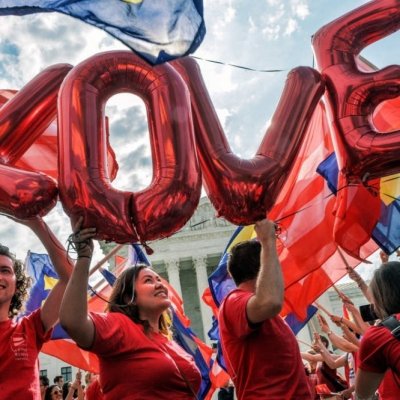 For millions of people across the United States, my beautiful wife and myself included, June 26, 2015, will forever be remembered as a day of triumph, victory, and so much love. The momentous SCOTUS ruling did not simply grant couples all over the country the right to marry whomever they love without fear, it also made many of us feel like first-class citizens for the first time. Long-term couples who have been fighting and hoping for this right for decades stood alongside the younger generation and their allies, overcome with joy and hope. It's impossible to pinpoint just how many beautiful moments occurred on the day love finally won, but I hope that you will look at these lovely examples and see that, truly, #lovewins – always. (P.S. Let me preface this by saying that if you do not agree with same-sex marriage – or, as it's now known, marriage – you're gonna have a bad time!)

1 Justice Kennedy Pens the Most Perfect Closing Paragraph Ever Written 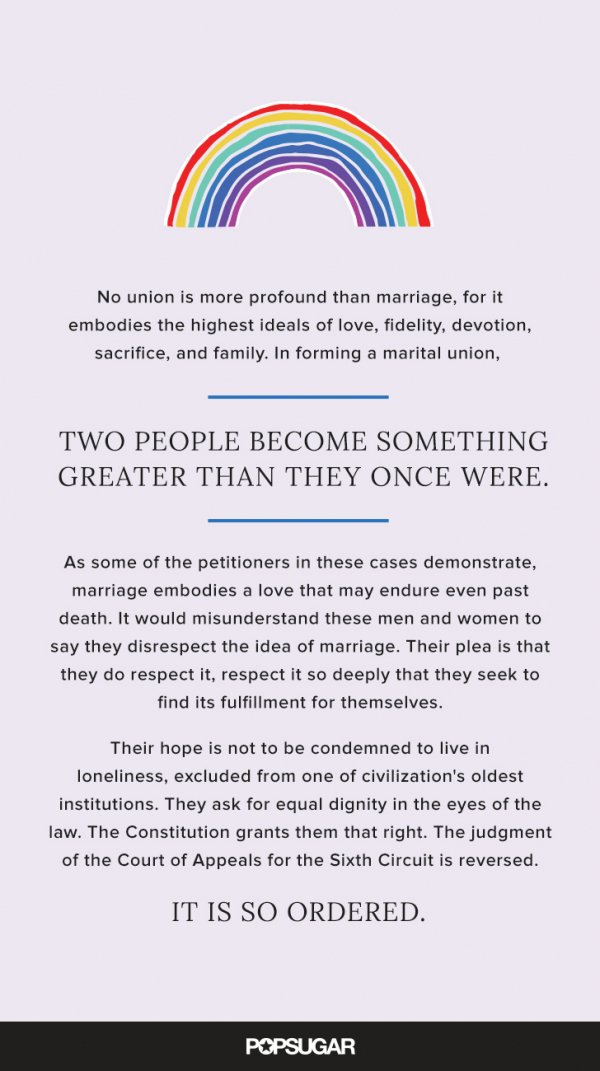 Justice Kennedy's eloquence and hi passion for the subject shine through his closing paragraph in the ruling, but the words he chose are even more important. I haven't talked to a single person who did not get chills from these remarks. People got teary eyed and their hearts raced with hope. That's primarily because this is exactly what everyone wants when they're ready to marry someone they love. Same-sex couples are not out to destroy anyone's religion or faith. We do not want to tarnish anything. For us, marriage is a vow, a promise, a way to bond ourselves with someone who means the world to us – isn't that true for every couple who's crazy in love and ready to spend their lives together?

2 After More than Fifty Years Together, This Couple Finally Got Married 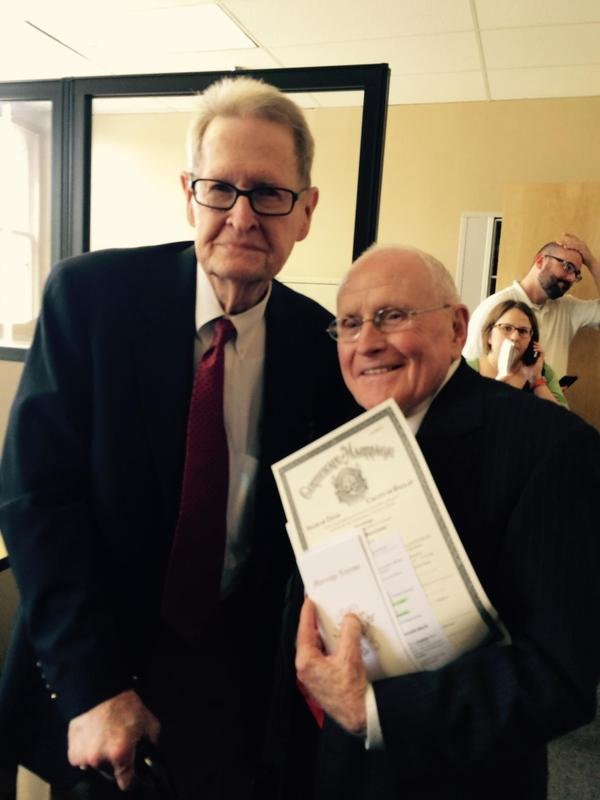 Jack Evans and George Harris are 85 and 82, respectively. Like many other couples, these two gentlemen attended the same party and found that they fancied each other. The difference? That party occurred over 50 years ago, for one thing. For another, their first meeting could have ended in an arrest, the publication of their names, and the utter ruination of their lives. You see, in Texas and countless other states, the police used to plan sting operations disguised as parties meant to lure, target, and ultimately arrest gay men, a practice that resulted in publicly outing them and all too often sending them fleeing from their hometowns. Fortunately, Jack and George did not have to flee but the two men, who are still so clearly and so deeply in love, waited more than five decades for the right to marry in Texas. It finally happened. 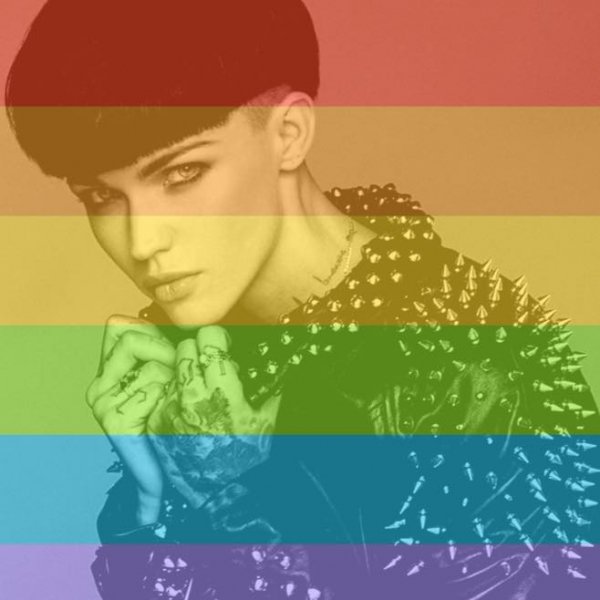 So why is something as small as a profile picture considered momentous, memorable, or magical? Because there were so many rainbows on Facebook following the ruling. By the weekend after, my entire timeline was covered in them – and I'm sure the same is true for a lot of you. On the face of things, this might seem pointless, even inconsequential. However, to many members of the LGBTQIA community, it was a touching and beautiful showing of solidarity. They weren't the only ones changing their profiles, you see. Straight allies, family members, friends, and supporters did it to show their happiness and to share in the joy of the ruling. As of this writing, over 26 million people have changed their profile pictures (source: out.com). Think about it. Think about how something so small means so much. 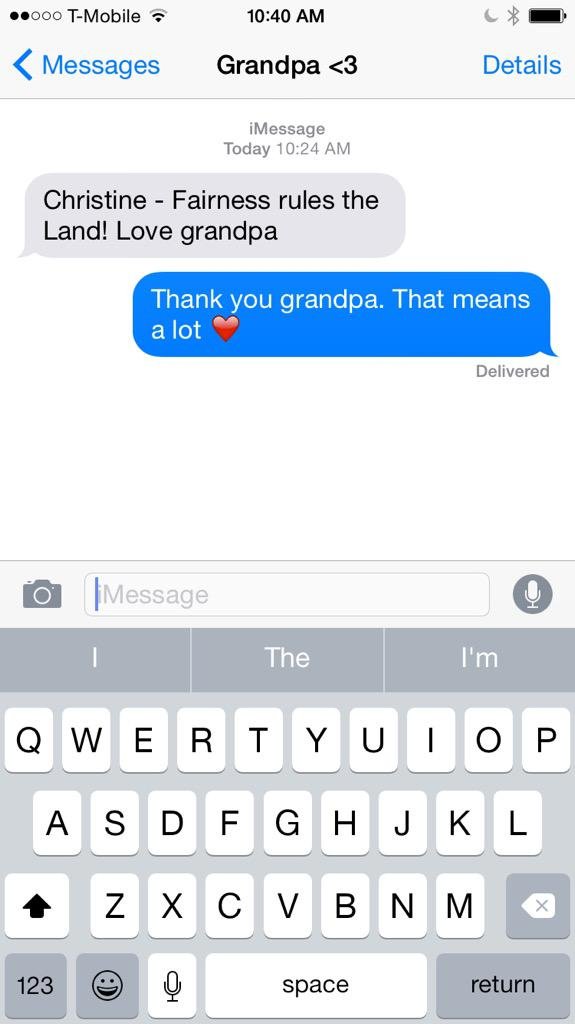 Even grandpas! But seriously, from Facebook to Twitter to texts, there was simply so much love going around. Even our mortgage broker sent a text to Heather to congratulate us. Brothers sent their congratulations to sisters, parents celebrated with their children, and kids shared the joy with their parents – it was and still is extraordinarily heartwarming, don't you think?

5 The White House Got in on the Celebration Big Time 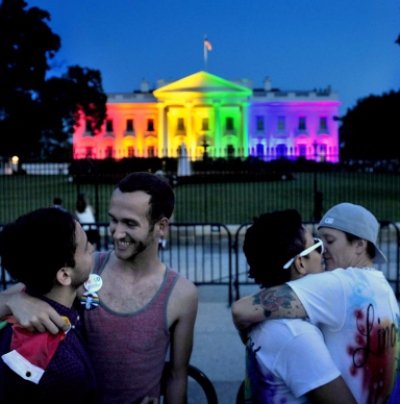 I don't think anything else needs to be said, but since I'm good at saying things in a rambling profusion, I will. There is so much love in this photo. Regardless of politics or opinion, it is unbelievably amazing to see this kind of support from the White House on such a monumental occasion.

6 A Bunch of People Decided to Move to Canada 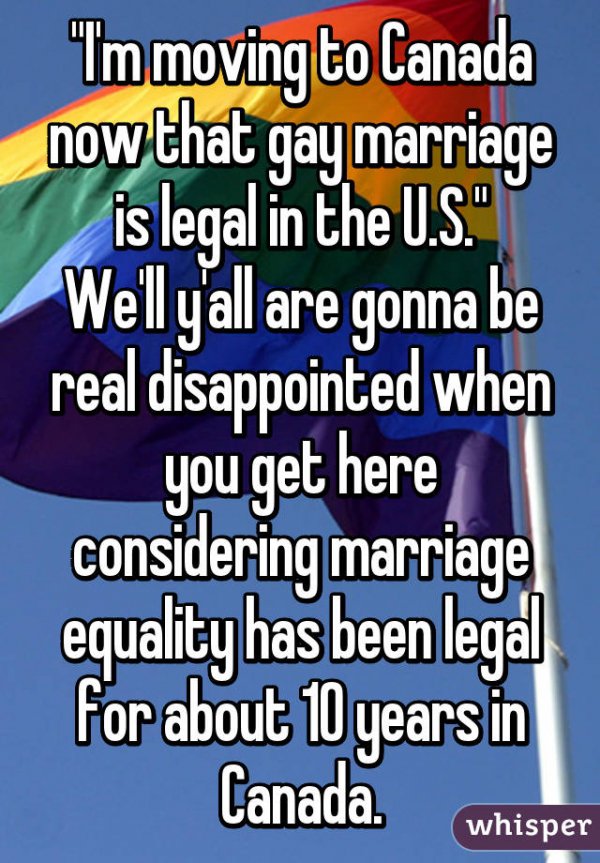 File this under “magical,” for “magically delicious,” because I'm still laughing at the people who think moving north is going to help them. It might have been a blight on an otherwise phenomenal day, except it's hilarious. It's sad, too, though. I'm not a fan of organized religion, but I would certainly never threaten to move if a family of Christians moved in next door. Also, sorry, Canada. The US didn't mean for this to happen. We know you don't want these folks, but we hope you'll forgive us for not actually telling any of them that Canadians embraced marriage equality a decade ago. We're just going to sip some tea and watch the fun.

7 Jim Obergefell Emerged Victorious and Love Won as a Result

Jim Obergefell is a wonderful, courageous, and heroic man. He married his husband, John Arthur, in 2013 and lost him to ALS the same year. They had to get married in Baltimore, at great risk, because Ohio, their home state, did not recognize their marriage. They did not acknowledge it following John's death either. A sick man and his loving partner had to board a plane and fly to another state for a 10-minute marriage ceremony. They were married for only three months. Obergefell was a driving force behind the SCOTUS ruling, simply because he wanted John's death certificate to bear his name, as John's husband. The journey to this point was long, arduous, and complicated, yet so poignant as well. The story is too long to tell here but I urge you to read about it, if you haven't already, simply because it speaks of a love that, as Justice Kennedy wrote, endures even after death.

June 26, 2015, was all about love and equality. I thank everyone who showed their support, whether they marched, petitioned, or simply stood up and made their voices heard on any platform. Please, show us how #lovewins. Share your favorite moments and your favorite stories. Share your personal feelings. Share your love. And again, thank you – from the very bottom of my heart.