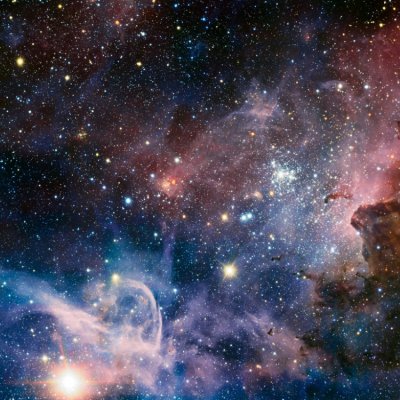 Astronomers will tell you that, although the night's sky seems peaceful, there are stranger and more dangerous things out there than we can even imagine (not counting any alleged aliens). Following are 8 of the strangest, most beautiful and most frightening objects in the known Universe.

1. The “Goths” of the Universe

Nebulas are among the strangest things in existence, and are nicknamed the “goths” of the Universe. These large clouds of dust, plasma and gas come in all shapes and sizes, and are sometimes so dense they block all light, appearing to be extremely dark and mysterious.

Imagine living in a place where it's not only day all the time, but the light from the sun(s) is 54 times stronger than that of our own Sun. This is the case with the Castor System. Formed of three binary star systems orbiting each other, it's one of the brightest objects in the sky.

The cosmic microwave background is seen as a remnant of the oldest explosion that ever was: the Big Bang. Apparently it's everywhere, and it was first discovered and explained by scientists who were picking up a strange type of “radio noise” now considered to be the best explanation behind the famous Big Bang theory.

A supernova is one of the strangest and most powerful events in the universe. When a star dies, it sometimes explodes in an incredible display of super-hot plasma, in some cases being brighter than an entire galaxy, as observed from Earth.

If you thought shooting stars were just meteors burning up in our atmosphere, you might not have the whole story. Not many people know that real shooting stars actually can form, as binary star systems are pulled into a giant black hole. When that happens, one of the stars is sucked in, while the other is thrown out into the far reaches of space at millions of miles per hour.

Gliese 581 C is one of the most unusual planets, being caught in a tidal lock orbiting a red dwarf star. Not only are its skies a hellish red color, but the planet always has the same side turned towards its star (much like the Moon to the Earth) which means that, depending on which side you're on, you could either freeze or melt to death. Only a thin belt of land in the middle has the potential of supporting life.

If you thought the previous planet was bad, think of a world entirely made of ice where the surface temperature is almost 500 degrees Celsius. You'll find a planet like this in the same star system as Gliese 581 C, this one having a strong gravitational pull that compresses water molecules and doesn't allow the water to evaporate even at huge temperatures.

Quasars are some of the most powerful objects in the known universe. They are essentially a type of supermassive black hole found in the center of the oldest galaxies ever to be observed and surrounded by an accretion disk. Planets, stars and even light get sucked in, the quasars then releasing enormous amounts of energy, some of it being picked up billions of years later by our radio telescopes on Earth.

There are definitely some strange and scary things in the universe, but fortunately most of them are unimaginably far away. Which one is your favorite? What other weird phenomena or objects in the universe would you add to this list?