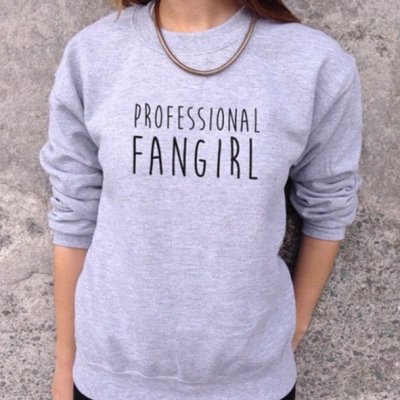 Fan girls wear their obsession on their sleeve. To the outsider, the signs of a fan girl might not be so obvious but as a fan girl you know them. And it isn’t all about being out of control in your love for something. Not sure if you’re a fan girl? Here’s how to tell if you’re a fully paid-up, card carrying fan girl:

1. You Know All the Factoids about the Object of Your Obsession

You know all about their family; if the mom and dad are divorced, how many siblings there are and what their true name is. A lot of people can find out that stuff, though. You may also know the name if their first grade teacher and what kind of grades they got in school, the name of their first love from kindergarten, the brand of deodorant they use, and if they like smooth or chunky peanut butter. You even know the real reason they broke up with their significant other. You’ve got even the minutest of details and you’re not sharing them with anyone!

2. Copycatting is a Sincere Form of Fan Girl Flattery

Stars like and do some obscure things, and when you’re a fan girl you like those things too-and even if you don’t you’ll learn to like them! Perhaps you learned that Katy Perry likes mushrooms-well, now you like mushrooms too! Demi Lovato eats clay to help her digestion? Throw away the chalky pills because now you’ve got a new cure. Taylor Swift’s favorite number is unlucky 13? Well, it didn’t seem to bring her bad luck, so now it’s your favorite number too!

3. You Defend Your Idol to the Absolute

A true fan girl won’t let anyone talk smack about the object of their affection. So, Taylor Swift has had a lot of boyfriends. She is selective. And so what if Miley Cyrus sticks her tongue out all the time, maybe she’s a Gene Simmons fan. Justin Bieber in trouble with the law again? He’s just not used to all this attention, it’s stressing him out. And how can you possibly think anyone sings better than Selena Gomez? You’re ready and willing to get into a heated debate with the haters.

4. You Have Enough Fan Merchandise to Open a Shop

You are a veritable warehouse for anything relating to your fandom. You have all their songs, their books, their clothing or perfume line, and the bobblehead dolls. If anyone gives you anything related to your obsession, such as paper party plates or a pillow case emblazoned with their image, tears of joy roll down your face as you sob in utter gratitude. The things you own may actually qualify as a shrine in some countries. And you will never sell these items, NEVER!

5. You’re up on All the Tweets and Blogs

You probably even have a blog of you own, since you are the most well-informed fan that ever existed. If anyone says anything about them on the internet, you jump right in and post a reply. If someone tweets that they ate Cheerios this morning, you run to the store to get Cheerios, because that’s the kind of fan you are! You’ve heard any interview with them in it, and you are on top of anything that he or she says and what people are saying about it.

6. You Have (or Are Planning to Get) a Tattoo

Not only do you know where all the tattoos are located on their body, but you can describe them and you know what they mean. If you haven’t done it already, you want one of your own just like it. Or better yet, you can get the lyrics to one of your favorite songs tattooed across your back, because, after all, those words are pure poetry.

7. You Get Defensive if Someone else Says They Are a Fan

You know in your heart that there isn’t a fan bigger than you, who has dedicated your very life in support of your fandom. How dare someone claim to be a fan because they bought a few songs? What are they thinking? Do they have an autographed limited edition commemorative plate like you do? Do they own a coffee mug believed to have been actually touched by the object of your obsession? That’s right. You own this fandom.

Step up to the plate fan girls. Who or what is your obsession?