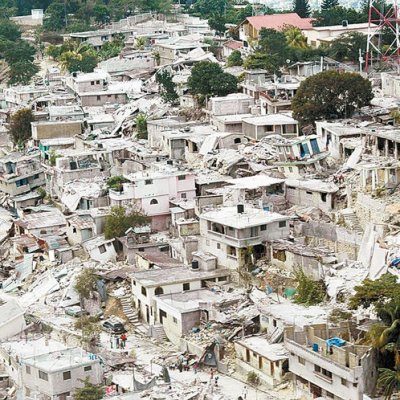 On this date in 2010 a massive earthquake rocked Haiti.

The Caribbean nation, which occupies the western half of the island of Hispaniola (Dominican Republic occupies the other half), suffered an earthquake of 7.0 magnitude. It was the strongest quake in the region in more than 200 years, it had a death toll of 200,000+ and it made 895,000+ Haitians homeless.

The quake hit the southern region of Haiti at 4:53pm local time. Port-au-Prince, the country’s capital, was about 15 miles from the epicentre. In the densely populated city, devastation was widespread: countless homes became piles of rubble; municipal buildings like hospitals, schools and churches totally collapsed; roads were destroyed and became blocked by debris. Government buildings such as the presidential palace, parliament building and the state prison suffered badly. The lack of a national building code and poor quality construction made the damage worse. Infrastructure was in such a bad shape and with fear of disease from decomposing bodies, corpses were picked up in their thousands to be committed to mass graves.

The earthquake was truly disastrous for Haiti. Haiti was the poorest country in the Western Hemisphere. Malnutrition, disease, limited access or education, violence and political corruption were facts of life, especially for 80% of its 9 million population who lived in poverty. A massive relief effort got underway as soon as the world heard the news with billions of dollars of age pledged.

Sadly, it’s old news now and Haiti is a long way from recovery. Six years on, the relief effort hasn’t made as much inroad as the people of Haiti could have hoped for.
Also on this day:

1908: A wireless message was sent long-distance for the first time from the Eiffel Tower in Paris.

1932: Arkansas Democrat Ophelia Wyatt Caraway, was the first woman to be elected to the U.S. Senate

1948: The U.S. Supreme Court ruled that states could not discriminate against law-school applicants because of race.

1986: Space shuttle Columbia blasted off with a crew that included the first Hispanic-American in space, Dr. Franklin R. Chang-Diaz.