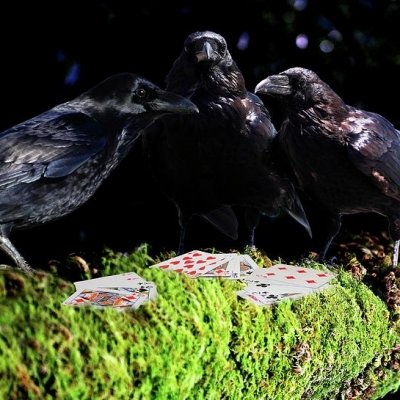 When looking at different facts about ravens, you can’t help but notice the surprising, intriguing and even downright shocking things that researchers have discovered. You most probably know that they are highly intelligent, and I, for one, find them incredibly beautiful. But let’s take a closer look at some of the really fascinating facts about ravens that not many people are aware of.

One of the lesser known facts about ravens you might find intriguing is their adaptability. Ravens can live in a huge variety of habitats, including cliff tops, deserts, mountainsides and forests. They can eat anything you have to give them – from meat and fish to fruit, seeds, carrion and even garbage – and they will not shy away from tricking other animals and stealing their food. They are definitely some of nature’s most accomplished vagabonds.

2. The Ingenuity and Deviousness of a Raven

Speaking of tricks, there are countless times people have observed ravens to be clever and logical, but they can be downright devious. You can sometimes see them pull a fishing line out to steal fish, drop pebbles and stones from a distance to scare away predators and intruders, or even play dead next to a tasty piece of meat to discourage other ravens from taking it.

Aside from their intelligence, one of the most exciting facts about ravens is that they are extremely playful, and they often combine their advanced intelligence with that playfulness. You can witness ravens diving off mountains and riding the air currents just for fun, shadowing their companions while flying or even playing “stick” – with some ravens dropping twigs for their companions to swoop down and catch them!

Although in the wild, ravens only live about 17 years on average, sometimes they can even live up to 23-25 years before they can’t keep up with their younger and faster cousins. In captivity, however, some ravens can happily reach 40 years of age, making them great long time companions, even though they may not be the cuddliest of pets.

Now they may not be parrots, but one of the facts about ravens that will really make you doubt your own senses is their ability to talk. Ravens are commonly known to be able to imitate other bird calls and a variety of different sounds, including human speech. In captivity, some ravens even learn to imitate quite a few words and even the tone of their owner’s voice!

6. Ravens in Myths and Mythology

European cultures often used to associate ravens with evil symbols, linking them to the souls of the damned in France or Germany. Also, according to Danish superstitions, they were even believed to be exorcised souls that you should never look upon. Of course, they were part of many positive myths and cultural themes as well. They were seen as messengers of the gods by ancient Vikings, Tibetans and Greeks, and some Native American tribes even worshipped the raven as a deity in itself.

7. The Persistence of Ravens

Finally, a really amazing fact about ravens is their persistence and daring in getting what they want. You’ll see ravens boldly going to a bald eagle and taunting it until it lets go of the prey it caught!

The intelligence, carefree nature, adaptability and even mystic aura of the raven have made them to be seen by many as the nomads and storytellers of the bird kingdom. Do you know any more fascinating facts about these remarkable creatures?