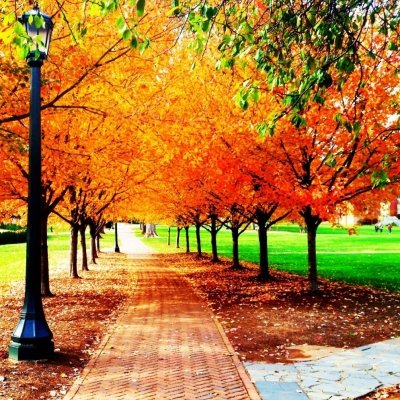 If you wonder what hamsters and the French Revolution have to do with the autumnal equinox, here are a few facts about the first day of fall that will surprise you. We all know that the solstices and the equinoxes are dictated by sun’s position in the sky. Every year, on the 22nd of September the day and the night will last roughly the same amount of time and from that date the days will grow shorter until the winter solstice. Because autumn is the favorite season of a many of you, here are 7 interesting facts about the first day of fall that you didn’t know:

One of the most interesting facts about the first day of fall that you didn’t know is the fact that the full moon nearest the autumnal equinox is known as the “harvest moon” because during this time of year, the moon rises earlier in the evening, this allowing farmers to work a much longer in the evening. When this moon occurs in October, people call it the “full corn moon” because it coincides with the corn harvest.

2. It’s the Prime Time for Viewing the Aurora Borealis

During this beautiful season, it’s the prime time for viewing the aurora borealis. In September, you won’t admire only the beautiful colors of leaves but also the sky, since it will often have a colorful display of its own. The scientists from NASA say that during this season, geomagnetic storms happen twice as frequently than the annual average.

The autumnal equinox has a pretty big impact on some animals too, especially those at high altitudes like the male Siberian hamster. This small rodent experiences a swelling of his testes up to 17 times their normal size when the days begin to get shorter.

4. The Fall Equinox Was the Official Start of Each New Year

5. The Sun Rises Due East and Sets Due West

If you didn’t know already, I must tell you that the spring and fall equinoxes are the only two instances during the year in which the sun rises due east and sets due west. If you just moved in a new apartment and you don’t know which is which, use the fall equinox to note where the sun is rising and where is setting and you won’t get lost again.

6. Sometimes the Fall Equinox Can Be on the 24th of September

The term equinox actually means equal. It comes from the Latin “aequus” for “equal” and “nox” for “night”. This is because the equinox (both in the spring and the fall) represents the point where the day and night are equal. A lot of studies have shown that this statement is not quite true because day and night would be equal (12 hours long each) only if the sun were a single point of light and Earth had no atmosphere.

I found some of these facts about the autumnal equinox very interesting. How about you? What do you think? Do you know any other interesting facts about the first day of fall? Please share your thoughts with us in the comments section!