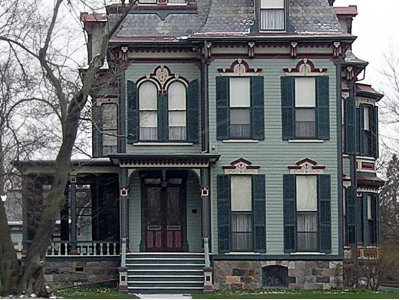 There were some seriously dangerous things in homes of Victorian England. Your home should be a sanctuary, somewhere you feel safe and secure and so it was for the Victorians. The Victorian Age was a time of massive scientific discovery and development, but very often “new” things did more harm than good – unbeknownst to the people supposedly benefiting from them. Much of the science that has identified the harms and disadvantages came a long time after, and scientists are still uncovering and understanding the issues today. Here are just some of the dangerous things in homes of Victorian England you’ll be glad we don’t have to worry about in our own homes.

This point was generously submitted by one of our readers, Queenie. Thanks Queenie! You can submit your own point at the bottom of this post. We'd love to hear from you!

Arsenic was used as an ingredient for green dye in the 18th and 19th centuries. It was used in things such as clothing and wallpaper. But arsenic is poisonous and caused many deaths.

As we know, processed white sliced bread is one of the food evils of the world today. With its processed fats and sugars and countless preservatives, it might be one of our staple foods, but we at least know that it can be bad for us. In Victorian England it was incredibly dangerous. In a bid to increase profits, the bulking substitute alum was used. It led to malnutrition, constipation, and bowel problems, which often killed children. It’s incredible to think that one of the most dangerous things in homes of Victorian England was a foodstuff that was meant to be cheap, filling and nutritious. Most people were ignorant of the bulking agents used and certainly wouldn’t know whether it was alum, chalk or bean flour.

Hearsay can cause real danger, and it turned common milk into one of the most dangerous things in Victorian homes. A rumor spread, it was deemed to be the truth and householders decided to use boracic acid to supposedly ‘purify’ the milk to make it last longer – remember pasteurization was still not a method of mass milk production at this time. Boracic acid removed the sour taste and the smell, but even small amounts of boracic acid can cause diarrhea, vomiting, and could even house bovine TB. An estimated 500,000 children died from drinking adulterated milk in the Victorian era.

One of the killers in Victorian homes was bathrooms. Toilets would sometimes explode for apparently no reason, causing horrific burns and death. The reason for this was methane coming from human waste building up in the sewers. Early flushing toilets would actually leak waste back into homes, so a naked flame from a candle was enough to cause an explosion.

The Victorian era was a time for rapid expansion. Hasty construction led to staircases often being too narrow and steep. Servants, especially, were susceptible to injury and death in Victorian homes. Combine the fact they were wearing long skirts instead of jeans, and that in homes able to afford servants stairs were required to be highly polished, and it doesn’t take much to see how so many injuries were caused.

Parkesine was invented by British inventor Alexander Parkes. It later became known by the American name of Celluloid. It was extremely useful in everything from combs to billiard balls. These items previously had to be made from ivory imported from Africa and Asia. Unfortunately, treatment methods to make the compound safe didn’t exist so Parkesine would become flammable as it degraded. And it could explode on impact, which makes it one of the most dangerous things in Victorian homes.

Today, you’ll generally only find asbestos in usage when someone is discussing a legal case. We know asbestos fibers lead to cancer and can lead to death. In the Victorian period, it was known as the ‘wonder material’. It could be used in everything from houses to clothing. Even to this day, we don’t know how many people this greatest of dangers in Victorian homes killed.

At this time, refrigerators were widely found across England. They were still flawed during the Victorian age. They were prone to leaking gases like sulfur dioxide, ammonia, and methyl chloride. All of these gases attack the respiratory system and may lead to death, or at least disability.

Electricity was confined to lighting until the Victorian period. During the Victorian period, innovation went viral. Inventions like the electric tablecloth, which didn’t react well to spillages, were directly responsible for a number of deaths. The main cause of death was plugging too many devices into a single socket, though. Electrical fires were common. Plugging too many devices into one outlet, doesn’t that sound like a familiar problem?

Exploding toilets? Poisonous toothpaste? Combustible tablecloths? Lethal gases? We may have our unsafe items these days but we should be glad we aren’t exposed to the danger in Victorian homes. Can you think of anything similar to these dangerous items?