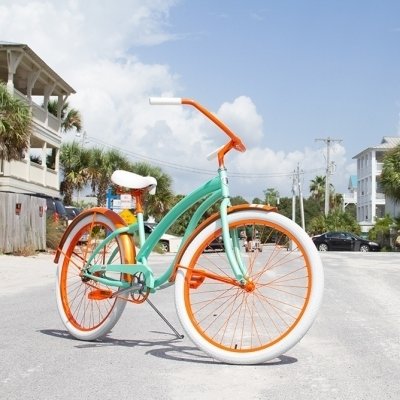 Everyone loves a success story, which is one of the many reasons why Shark Tank is such a popular show. You watch Shark Tank, right? This past Friday, viewers got to see an update on one of the show's successes: Villy Custom, brainchild of Fleetwood Hicks, he of the bold, beautiful bikes and the big, beautiful bull mastiff (Villy, of course).

However, what you saw is only part of the story. Villy Custom bikes aren't your average bicycles, and not just because they're vibrant, fun, and fully customizable. They're designed to make you feel like a kid again, to help you remember the joy of exploring on your bike. They're about meandering, wandering, and carefree journeys. That's how Fleetwood himself felt when, during a trip to LA, he rented a beach cruiser for an hour, intending to ride around Venice Beach – and came back six hours later to a very angry rental owner, who was quite sure his bike had been stolen. What did Fleetwood do that whole time? He simply rode his bike, explored the shops, talked to people, and enjoyed an adventure.

Thus began the idea for Villy Custom. Fleetwood returned to Dallas, bought a beach bike of his own, and began buying them for his friends as well, so they could ride around with him. This led quite naturally to designing and building custom bikes, a journey that ultimately led to the Shark Tank – and to a crazy awesome deal with Barbara Corcoran and Mark Cuban.

Not surprisingly, everyone always asks Fleetwood what Barbara and Mark are really like. He describes Barbara as friendly, fun, fabulous, and energetic. She's always available and when she invests in someone, she invests all the way. Her team is more like a family, but although she's unfailingly supportive and friendly, she's always honest. Mark is honest to a fault as well and he's always ready to provide both constructive criticism and helpful critiques. He also helped Villy Custom put together a truly epic commercial.

There's no doubt that their mentoring and entrepreneurial skills have helped Villy Custom to become such a huge success, but Fleetwood is the unquestionable heart and soul of the company. His enthusiasm shines through every word. He's a chilled authentic guy who's doing more than building custom bikes. He loves what he does and so every bike is made with love. When you buy a bike, you're investing in quality, absolutely – oversized, comfortable seats; specialty tires; protective and gorgeous powdercoat accents – but you're also investing in joy, because the care and exuberance that goes into the construction of each bike will touch you the second you put your feet on the pedals.

Since appearing on Shark Tank, Villy Custom has sold upwards of 1,500 bikes, the brand has appeared on The Price Is Right, and it's attracted the attention big names like OneRepublic and Rashad Jennings of the New York Giants. The Dallas shop, right in the Design District, is in full-swing, but you can also find a brand new bike boutique in Blue Ridge, Georgia. In addition to bikes for men and women, there are accessories and apparel, making it a one-stop shop. It just goes to show that with an idea, a dream, and drive, you can write your own success story – even with something as simple and pleasurable as a bike ride.

Keep in mind that 65 percent of bike sales are composed of women, stalkers. In the interests of health, joy, and being environmentally friendly, don't you think it's time to buy a new bike? While we're at it, though, have you ever had an idea worthy of the Sharks?